Caro Emerald, the Radio 2 favourite Dutch singer, recently returned to the UK to promote her second album, The Shocking Miss Emerald, her first UK No. 1.

With her unique jazz and pop fusion, which is made even more interesting with the use of a live mixing desk, Caro provided an exciting live experience at Portsmouth Guildhall on September 25th that was enhanced exponentially by her extremely talented band who were a joy to watch. 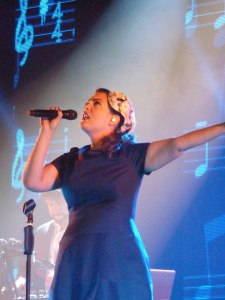 Opening with the bombastic Miss Emerald introduction, Caro strode elegantly onto the stage and sang seven songs from the new album, all of which were totally engaging, especially as Caro was constantly telling a story with her body language and considered pronunciation. Every word was placed carefully and dictated so that nothing was lost, which was a breath of fresh air after the lax clarity of many singers today.

The highlights of this set of songs were Completely, the sweet but bouncy love song, and Liquid Lunch, the fast-paced ode to drinking at lunch that apparently suits us in the UK very well!

Next, Back It Up was the first song to really get the whole sell-out crowd going, with an audience sing-along crowd counter melody going underneath Caro’s verses. I Belong To You then add a more sultry, Bond-style feel to proceedings, before Caro’s first outfit change during an infectious instrumental led by the charistmatic guitarist and bassist, who took centre stage and added their own personal flair. 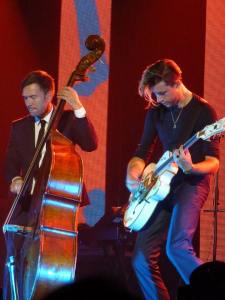 It’s this musicianship pervading through the entire performance that really enables Caro’s live performance to be as good as it is. There are so many layers going on all the time that it is sometimes difficult to decide who to watch- the horns, who always add a sense of fun and yet professionalism, or the keyboardist, who shows off in the intro to Tangled Up, or the bassist, who plays three separate instruments, or the guitarist, who often steals the stage. It’s unfortunate that they don’t seem to be credited anywhere on the internet, as these guys truly deserve recognition.

After this first instrumental, we get a stripped back version of Paris, the first of such intimate numbers due to the band’s recent acoustic sessions of some songs from The Shocking Miss Emerald- it’s free on her website, so go and download it now! The guitarist in particular shines during these types of songs, where he is able to showcase himself and duet with Caro in a perfect balance.

This combination of energy and subtlety continues to pervade through the rest of the gig, and the final stretch provides some particular stand out songs, with A Night Like This, The Other Woman and That Man all big tunes to sing along to, before Caro wound it down for an intimate finish of Ne Me Quitte Pas (If You Go Away).

All in all, the level of musicianship, storytelling and rapport put out from the stage was absolutely outstanding, and it’s no wonder that Caro Emerald and her band are becoming renowned. It’s only bad news for us in the UK that her arena tour here has been postponed by six months until October 2014, but I have no doubt she’ll be worth the wait. 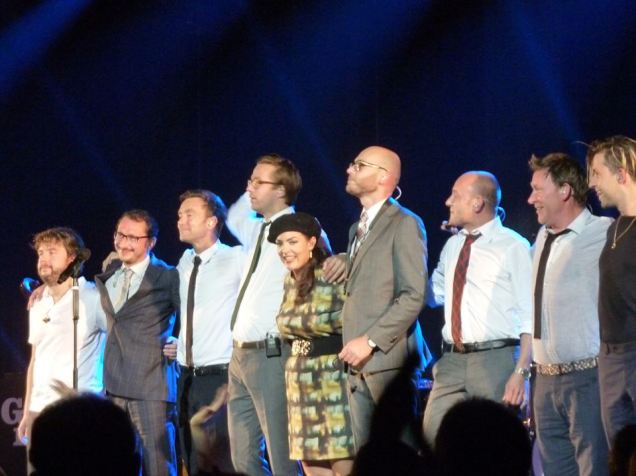 All photos by Natalie Tobitt.

What do you think? Cancel reply