I’m a journalist in my mid 20s who lives in London. Not a combination which traditionally implies lots of disposable income!

Yet everyone needs a holiday sometimes, so my boyfriend Frazer and I whizzed away to Brussels for three nights at the end of September.

We got (I think) fairly good prices for our travel and accommodation, and spent less than €150 when we were out there, which could easily have been reduced further if we’d not brought back gifts for our catsitters or sampled plenty of beer.

In fact, we loved Brussels even more than Paris, which for many UK travellers seems to be the pinnacle of European city breaks.

Here are a few tips on how to enjoy Brussels without spending half your savings.

Eurostar does a youth fare for under 26-year-olds and we’re both 25, so it seemed the perfect time to get a slightly cheaper fare while we still could.

The trip was only two hours on the train – the same as just going from King’s Cross to York – and Eurostar says the youth fares cost from £28 one way (ours were £35). A cheap and easy trip.

Airbnb is my new favourite thing.

We stayed in a lovely studio apartment right in the city centre, less than a 10-minute walk from the Grand Place,  costing us £209 for three nights. I had been searching for hotels and was struggling to find anything near the centre for anywhere near that price aside from hostels with shared facilities.

What’s more, the hosts left us two Belgian blonde beers in the fridge and a handy book of restaurant, bar and attraction recommendations. What more could you want?

We used some of the above recommendations, and I did a lot of TripAdvisor searching too, which meant I could immediately decide if something was for us based on the cost ranking.

On our first day, we went to get the best pizza in Brussels at Nona, according to our Airbnb hosts – and I think they were onto something, as it was genuinely amazing proper Neapolitan wood-fired pizza (between €6.90 and €13.90 each).

For more traditional Belgian food, we tried Fin de Siecle which was just around the corner from the flat and another one of our hosts’ recommendations. We had a waiter who explained all the vegetarian options on the menu to me (in English!) and his top five traditional Belgian dishes to Frazer. I had a delicious moussaka and he had a ham and potato dish (about €15 each) together with some thirst-quenching kriek (but we’ll come to that below).

Earlier that day, we had a pretty cheap lunch as Frazer tried some famous Belgian fries with mayo at the Maison Antoine kiosk in Place Jourdan. I didn’t, because the fries are generally made with beef dripping, so I just got a couple of pastries in a patisserie opposite. This cost us under €5 each.

Another lunch was at the Waffle Factory. There was a mixture of locals and tourists inside, and I’d chosen it because it seemed pretty well reviewed online. We tried the waffles two different ways on different days – the Brussels waffle with Nutella on top (probably the typical waffle you’d picture in your head) and the waffine, which had the Nutella INSIDE. (No, you don’t have to have Nutella, but we’re chocolate fiends). A nice cheap lunch, and fun to people-watch out of the window while getting chocolate all over your face. 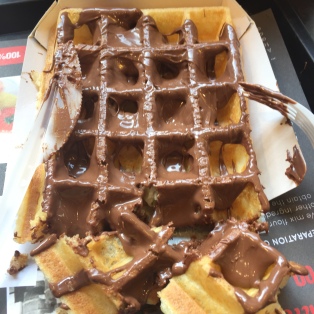 The Belgian waffle with Nutella

Dinner that night was at Monk, a cool bar with a small pasta restaurant in a back room. It only does spaghetti in four varieties plus a special, but it does it well, and for a good price. Oh, and the bread was divine. Carb alert!

We also went to (a very busy) Lidl on our first day to get some bread, milk, cheese etc so we could make easy and cheap breakfasts, which helped too.

A large part of our enjoyment of Brussels was enjoying different Belgian beers at various bars and restaurants, arguably the most unnecessary expense of the trip but so worth it.

Various varieties of Kriek were our favourite, although I had a couple of great blonde beers too.

The coolest bar (but definitely not cheapest) was Delirium, which holds a world record for having the most beers, while Monk, Moeder Lambic and Mappa Mundo had great vibes and drinks too.

This was the main way we kept our budget down – by not paying to actually do very much!

We paid €7 each (for 12-25s) to visit the Comic Strip Museum which provided a morning of fun with Tintin (though more of him please!), the Smurfs, Dickie, and Asterix and Obelix. We also paid €7 each (adult tickets) to tour Cantillon Brewery, a traditional family brewery which has been running since 1900. The price includes a taster of two different beers at the end of your self-guided tour. 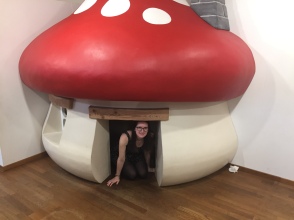 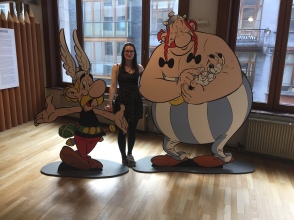 Hanging out with Asterix and Obelix 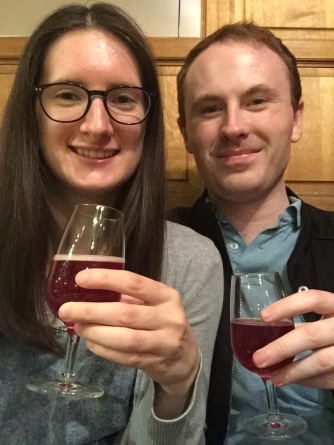 Other than that, we mostly just wandered around Brussels on foot, taking our time to explore. We visited the European Parliament for free, doing one of the audio tours into the hemicycle and then going to the interactive Parlamentarium museum. 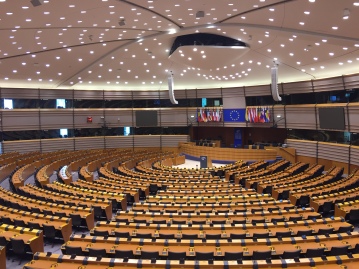 The hemicycle at the European Parliament

There are lots of murals to spot around Brussels

We got a fantastic free view of the city, all the way across to the Atomium, by using the glass lift from the Marolles district up to the Palais du Justice.

We saw the trio of urinating statues – Mannekin Pis, Jeanneke Pis and Zinneke. We explored the Grand Place, Galeries St Hubert and surrounding areas and shops, including going chocolate shopping. We sat in Parc St Leonard near the European Parliament.

Most enjoyably, we stumbled across two free concerts – one by a group of middle-aged singers in Place St Gery near our flat on a Wednesday afternoon, and the other a huge concert in the Grand Place which was screened live on Belgian TV and seemed to have some quite big music stars. It would definitely be worth checking to see if you could time a trip with any other free concerts or events. 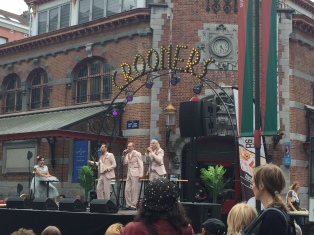 Overall, Brussels has great food, great drink and an enjoyable, chilled out vibe. And it doesn’t have to cost you a fortune either, despite all the fancy hotels and restaurants for the EU diplomats.

What do you think? Cancel reply