Today yet another much-loved figure, comedian Victoria Wood, died after a battle with cancer.

Other notable names taken by this awful disease in just the first four months of 2016 include Alan Rickman,  David Bowie, Sir Terry Wogan, Sir Peter Maxwell Davies and Lemmy from Motorhead.  (Others who sadly died but of different, equally horrible illnesses include Ronnie Corbett and Paul Daniels, compacting the pain).

Considering our average life expectancy is generally going up, many of these figures were not particularly old. Alan Rickman and David Bowie were both 69 and both still seemed to be excelling in their respective careers.  Victoria Wood was just 62.

That’s why the public was so particularly shocked- cancer can sneak up on anyone, at any time, and it is terrifying.

END_OF_DOCUMENT_TOKEN_TO_BE_REPLACED

Just hours after hosting the Baftas, Stephen Fry has quit Twitter and deleted his account (not for the first time). He joked that costume designer Jenny Beavan, who collected an award for Mad Max: Fury Road wearing a leather jacket, trousers, scarf and shirt, had come dressed as a bag lady, to noises of shock from the star-studded audience.

Soon after the joke appeared on TV he Tweeted that they were dear friends and she got it. So calling Beavan a ‘bag lady’ was a fun in-joke between them. But how was the audience to know that? He could have established that before throwing an insult, which understandably people got defensive about. Women in the industry have enough to deal with as it is.

Beavan showed up to an awards ceremony in her own clothes and own style rather than a glamorous gown. Good for her! And she won! So without knowing they knew each other, of course it was interpreted as a mean, bitchy comment.

END_OF_DOCUMENT_TOKEN_TO_BE_REPLACED 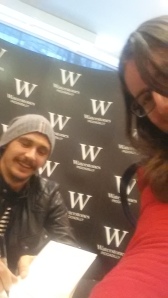 Waterstones Piccadilly are always running awesome author events. I went to a talk and signing with American young adult author Rainbow Rowell in July and I’m eyeing up their Christmas evening this week. But on Saturday they really outdid themselves: they hosted the hugely famous Hollywood actor with just about every string to his bow, James Franco. On this occasion he was in his author guise, signing copies of Actors Anonymous, Palo Alto and Directing Herbert White, but obviously lots of the 300-odd fans (they’re just the ones who were allowed in the queue!) liked him for different parts of his oeuvre.

James Franco has been my favourite actor for about ten years now, for better or worse, and when Palo Alto, his book of connected short stories, came out four years ago I absolutely loved it. Actors Anonymous had been on my Amazon wishlist for months but obviously the chance to meet this man and get a copy from his very hands was too much to resist.

END_OF_DOCUMENT_TOKEN_TO_BE_REPLACED

On Thursday October 3rd, Sir Trevor McDonald came to Kingston University for an “An Audience With…” lecture, an event organised by the university’s careers service, KU Talent.

The room was packed out and everyone was extremely patient when we discovered Sir Trevor was stuck in Kingston traffic and was eventually to be half an hour late; some people are worth waiting for. Unfortunately the talk was also blighted by an uncooperative microphone that kept cutting in and out, which mostly affected those in the back half of the room, but Sir Trevor’s actual words (if you could hear them) were a delight to listen to, being both inspirational and funny.

END_OF_DOCUMENT_TOKEN_TO_BE_REPLACED

I’m sure I don’t even need to explain what I’m about to comment on, such is the furore flying round this week: on Sunday night at the MTV VMAs, Miley Cyrus “twerked” and all-round danced inappropriately with a foam finger, giant teddy bears and Robin Thicke, all with her tongue weirdly hanging out.

Obviously, this was pretty shocking for those Americans happily enjoying a relaxed evening in watching TV, especially since MTV had given it a 14+ rating (which many parents are now angry about) but it was probably even weirder for those in close proximity to the stage at the event. Miley is still 20, after all, which made it feel even more wrong than when Madonna and Britney Spears shocked audiences at the same awards show.

On the other hand, her age means that it’s a relatively normal thing to be doing. Relative, obviously, to level of fame. If you compare her stage to the normal girl’s nightclub then it’s comparable; hers just comes with a lot more eyes looking back at her. We have to remember that she’s been in the public eye since she was 12, and I don’t need to tell you what happens to a lot of child stars; all in all, she’s actually doing pretty well for herself. If this is her crazy moment, it’s not that unusual: she’s doing something that has become normalised to her, especially when others like Rhianna practically build shows around these kinds of moves.

END_OF_DOCUMENT_TOKEN_TO_BE_REPLACED

Hot on the heels of the 4th of July and the one day a year Americans everywhere actually admit to loving their country, the British didn’t want to be outdone and so we pulled out all the stops this weekend (6th-7th) to make it the one everyone will remember as this year’s summer (unless we’re lucky and this year’s nice weather does last a bit longer, of course!) Obviously, Wimbledon helped, with many even sacrificing enjoyment of the hottest day(s) of the year so far to watch the various finals and Andy Murray in particular winning- the first British man in 77 years to do so! I don’t even mention the British and Irish Lions for the rest of this blog, but I’m sure their win helped make Saturday special for many too.

So it’s hardly surprising that the heat/tennis combination led many to lounge around with Pimms and strawberries and cream (I can admit to fitting this stereotype). However, the difference between the days from whence this tradition came is that before we just did it. Everyone was perfectly content to just get on with it in little groups, and when they found out later round the water cooler that “oh, you had Pimms too! Wasn’t it a lovely day!” it was just part of the process. Now, Twitter and Facebook have changed everything, and it’s more than just updates on our days.

END_OF_DOCUMENT_TOKEN_TO_BE_REPLACED

Wow, Angelina is brave. Kudos to her. After everything the global media has accused her of and after every time they and everyone else has openly and unfairly judged her, she still has the guts to write such an open article for The New York Times, purely to try and help others to learn from her situation.

There have been criticisms and insults no end, of course. From implying it was unfair that she had the procedure just because she’s rich, to regurgitating the husband stealing line to saying “poor Brad”. Let’s look at each of these three recurring arguments one by one: